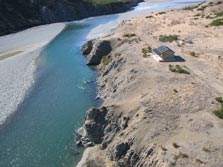 This valuable conservation land is managed by the Department of Conservation following purchase by the Forest Heritage Fund in 1993. Ka Whata Tu o Rakihouia Clarence protects some of the highest mountains in New Zealand outside the Southern Alps. It is of national significance geologically and for the many rare, interesting and unique native plants and animals it harbours.

Due to its relatively dry climate, the area escaped extensive glaciation during the Ice Age. Instead of glacial features, landforms above the original bushline are a result of mass movement of rock and debris. In places, it seems the very bones of the mountains are revealed - chalky white outcrops of limestone, contrasting vividly with deep-red remnants of ancient underground volcanic activity.